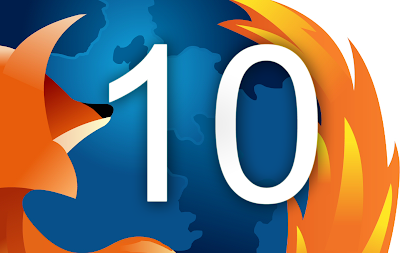 Mozilla Corporationhas has just launched a new version of its famous browser under the tag Firefox 10. Just after six weeks of release of Firefox 9, the Mozilla Corporation launched Firefox 10 for Windows, Macs, Linux machines and Android. This release is the Mozilla’s effort to cycle its brand for the larger expansion. The Firefox 10 has much fixed bugs and very improved extension support, a forward button and API for full screen web apps and multi-touch gesture support in the Android in the series of latest big improvements.

The previous versions of Firefox routed for breaking extension compatibility and the l developers soon manually updated the extensions to support the new version. In Firefox 10 the extensions are enabled to be compatible.The extensions introduced with Firefox 4 will remain working with this version of Firefox. Firefox for Android has also made massive improvements to the earlier version. Firefox Sync, a feature of the browser let users to synchronise bookmarks, browsing history, password and open tabs across PCs and phones is improved this time.

This version of Firefox is appreciated for being the first Extended Support Release version, a program provided especially for enterprise users and IT professionals that are too much concerned and pensive from rapid updates. This development occurred due to the threat from competitor Chrome’s increasing influence in browser market. In December, 2011 Chrome disabled Firefox from the world’s second most popular browser category after Microsoft’s Internet Explorer. The biggest change in the new version is improved extension support for developers and common users.